St. Charles Civil Parish was fourth on the list of the 19 original parishes that were simultaneously created out of the Territory of Orleans by Act I of 1807. Act I made no attempt to do more than merely list parishes, except, perhaps in a very limited venue, to convey some semblance of their general locality. Prior to 1807, the so-called “parishes” were neither political nor legal subdivisions of the state, but mere ecclesiastic vicinities. Act I lifted St. Charles and the other parishes it created out of the status of ecclesiastic vicinities to the category of legal and official political subdivisions of the Territory of Orleans. Initially, the eastern boundary (the city of New Orleans) was purported to be fixed as the eastern boundary of St. Charles until 1825 when Jefferson Parish was created out of the western portion of the Parish of Orleans. (Information extracted from a report on the boundaries of St. Charles Parish by Research Engineer Gervais Lombard, December 5, 1939, prepared for the Louisiana Department of Public Works.)

According to Cecil Morgan, dean emeritus of the Tulane University School of Law, in his narrative The First Constitution of the State of Louisiana, published by the Historic New Orleans Collection, the governing body of the parish was not set up in the first constitution, but the term police jury evolved by custom and the enactment of a series of territorial acts involving a novel use of the newly formed jury. Dean Morgan said a “jury” would be empanelled, often to do a specific job for the county or community, such as building a courthouse, bridge, or jail. Other duties followed, such as establishing a gendarmerie (police force) first to retrieve fugitive slaves, then as a regular parish police force, and later as a group to do things for the parish or county under the jury. Eventually, the “police jury” emerged as the parochial governing body.

For as far back as these early residents could remember, they and their ancestors had been ruled by kings, princes and warlords… From the beginnings of their history, the residents…were subjects, not citizens. And subjects, as we know, do not make the laws under which they live; subjects follow them. Subjects do not choose their rulers; subjects obey them. Before 1807, the King’s word was law and those men that the King appointed, enforced his law. The people were told that the King ruled over them because it was the Will of God … The King and the Catholic Church appointed all local officials in Louisiana … But in March 1807, a radically different system of government was about to take shape and dramatically change the lives of everyone living here. 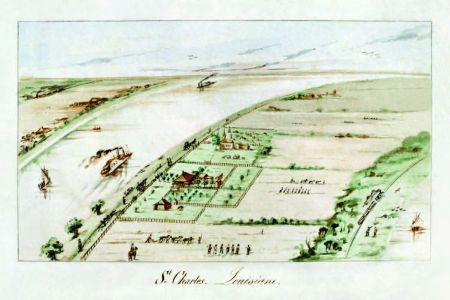 Father Paret’s watercolor painting depicts the Little Red Church and its surroundings in the heart of St. Charles Parish. The area displays present-day locations of Dufresne (Esperanza) and Hahnville on the west bank, across the river from Destrehan and New Sarpy on the east bank. The east bank Little Red Church, its cemetery, and the presbytery are surrounded by several dependency buildings. A visual of pre-Civil War St. Charles Parish. (Watercolor by Fr. Joseph M. Paret, Plantations by the River by Marcel Boyer, Edited by J.D. Edwards, Published by LSU Press)

Acts of the First Louisiana Legislature
ACTS, which documents proceedings of the second session of the first legislature of the Territory of Orleans. Act I of 1807 created St. Charles Parish as a civil parish. (Courtesy of the Law Library of Louisiana)