In 1860, the German Coast residents still had dirt roadways that remained well into the 20th Century. Road construction was left to the respective parishes. The most used roads on both banks were those running along the Mississippi River. Those riding on horseback or in horse-drawn buggies were faced with many obstacles, depending on the weather. Planks were sometimes laid to reinforce the dirt roads. Crude ferries carried travelers across the larger bayous, but the Mississippi River continued to be the major corridor for travelers and interstate commerce and continued to benefit the German Coast.

Antoine Gassen was born in 1830 and began his business career as a planter and in mercantile pursuits. He served in the Confederate Army during Civil War, was on the school board for over 30 years, and was warden of the Red Church for many years after his father’s death.

Layous was educated in the public schools, and at sixteen years of age became his father’s partner in planting and merchandising. His brothers were included in the partnership when they came of age. At 22 years of age, Layous was elected treasurer of St. Charles Parish and by repeated re-elections remained in that office. Layous Gassen worked at the courthouse for fifty-two years. On June 22, 1892, Layous and Miss Louisa Tureaud were united in marriage.

On the east bank, a unique new business was established in Destrehan. Numa Zeringue from Ama operated his original business from a little flatboat near the batture in front of the Red Church in Destrehan for three years beginning in 1872. Business continued from his boat until 1875 when he constructed and opened Mamzelle Store on the River Road a short distance west of Red Church. The store served the east bank as a popular shopping stop for over fifty years. Numa grew rice on his property from the River Road to the railroad tracks. Some of the rice was sold in his store and the rest was shipped downriver to be sold in New Orleans. Numa later was a warden/trustee of the Little Red Church congregation. His name is listed on the cornerstone of the church.

Legend holds that the “Old Spanish Trail,” which runs through St. Charles Parish, was used by the Spanish and Indians enroute to Florida and Civil War troops bringing supplies and food to encampments during the war. It was also probably used by German Coast residents to traverse to and from the bayou area. According to local historical researcher Gerald Zeringue, “From the west, the Old Spanish Trail crossed south Louisiana, passing through Boutte Station, following the Boutte railroad. It continued to what is now known as Sugarhouse Road in Old Town (Luling) to the River Road, passing Ellington Plantation and its large sugarhouse then in place.” According to police jury minutes of 1866, “the President is hereby authorized and empowered to issue Warrants for the amount allowed to Mr. P. Maillard’s and Mayronne’s Lands selected and purchased by the Parish, to lay out the New Public Road from the River to Magnolia Ridge, and that they should be first paid, out of the special funds appropriated for that purpose.” This new public road replaced the Sugarhouse route and became part of the Old Spanish Trail. Eventually the new route was named Paul Maillard Road. A ferry at Paul Maillard connected Luling to the east bank of the river. Many new businesses developed along the new corridor and Luling became a “boom town.” The Klondike Store and other businesses on or near this corridor were built from barge lumber. Many of these businesses closed as a result of a Luling levee setback and when later constructed, Highway 90 connected the German Coast to the new Huey P. Long Bridge.

Legend holds that early Indians and Mexicans traversed through St. Charles Parish on the west bank en route to points east along what might have been part of an earlier portion of the Old Spanish Trial. The trail was used by vaqueros (cowboys) to drive over 9,000 head of longhorn cattle to New Orleans. This beef was used to feed the Spanish soldiers during the American Revolution. Today Highway 909 in St. Charles Parish parallels the route of part of the Old Spanish Trail. 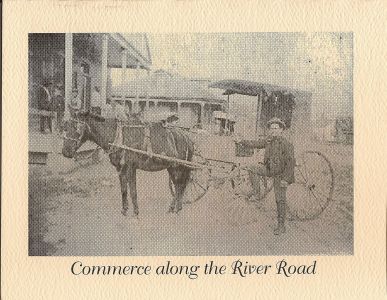 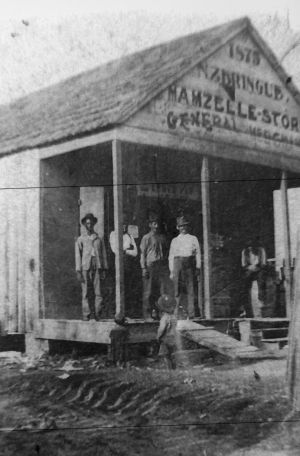 Numa Zeringue’s Mamzelle Store was built in 1875 on the River Road in Destrehan where the Capital One Bank is today. Notice the wheel ruts in the road. The family home was located behind the store. (Photo courtesy of Chip Zeringue)

St. Charles Parish as it Used to Be
By Numa Zeringue