In 1698, nobleman Pierre le Moyne, Sieur d’Iberville, a Canadian war hero, was selected along with his younger brother, Jean Baptiste le Moyne, Sieur de Bienville, to lead the expedition to establish a settlement and a French military outpost near the Mississippi River. Catholic priests were included in the Iberville party on his voyage. As the “Founder of Louisiana,” Iberville successfully rediscovered the Mississippi River on March 2, 1699, and settled the area in the French colony that would become the Louisiana Territory.

Iberville proposed the immigration of families and young women to make homes for the young settlers. He promoted agriculture as the colony’s chief livelihood. Iberville made several trips to France, returning with new colonists and supplies.

Arriving on the Gulf Coast in early 1699, Iberville set up a temporary village at Ship and Cat Islands, consulted with the Biloxi Indians, and then began scouting the land for a suitable place for a permanent settlement. Iberville, his brother Bienville, and about 50 Canadians and sailors (including Catholic priests), traveling in two large boats and two canoes, began pushing slowly southwestward, threading their way around the islands east of Lake Borgne, until they reached the Mississippi River.

After rediscovering the Mississippi, they began traveling upriver and on the fourth day reached a large Bayougoula Indian settlement (in St. Charles Parish) at the river’s intersection with a tributary at the site referred to as L’Anse aux Outardes (Bustard’s Cove), or present-day New Sarpy.

They found the Quinapissa had joined the Mugulasha and they later formed one village with the Bayougoula. Iberville discovered that the Mugulasha chief had a blue serge coat, and he was therefore probably the same chief LaSalle had met many years earlier. The glass bottle left by Tonti was discovered in the Bayougoula temple. Later Bienville was given the letter that Tonti had written to LaSalle. The Bayougoula called this letter the “speaking bark.”

Iberville continued traveling upriver, passing the present-day Louisiana capital. When he saw a red pole with the heads of a fish and bear, he named it Baton Rouge (“red stick”). The Indians produced and used the red paint to mark and decorate.

“Indians adored Bienville while fearing him because they knew him to be always just though often stern.”
—The Louisiana Historical Quarterly, Vol. 3, No. 2.
Iberville made his return trip to the Cat and Ship Islands, traveling east by way of Bayou Manchac, the Amite River, and Lakes Maurepas, Pontchartrain, and Borgne. Bienville traveled separately down the river to its mouth, then north to Cat Island. The two brothers arrived within hours of each other. Iberville’s exploration determined the permanent settlement should be on the Gulf Coast. The French then constructed Fort Maurepas in Old Biloxi (near the present-day Ocean Springs, Mississippi).

The French made Louisiana a Crown Colony in 1699 and explored the Lower Mississippi River Valley and the Mississippi Gulf Coast for fifteen years, mapping the area and establishing Indian relationships to learn about crops, food, furs, skins, and other resources. Iberville’s journal revealed this remarkable information on the early history of St. Charles Parish, focusing on the “traveling” historical items: the blue serge coat, the bottle, and the letter.
— The Louisiana Historical Quarterly, Vol. 3, No. 2

Jean Baptiste le Moyne, Sieur de Bienville, “Father of Louisiana” and “Founder of New Orleans,” who was chosen by the king of France to accompany his brother Iberville to Louisiana, remained in Louisiana for many years to help settle the colony. In 1718, Bienville founded the city of New Orleans. He served four terms as the French governor of Louisiana. He reportedly brought sugar cane and a few slaves with him. Governor Bienville is credited with establishing the first charity hospital with the Jean Louis Endowment. He failed, however, in his effort to prevent the transfer of Louisiana to Spain in 1762. He died in Paris in 1768 at the age of 84.

By 1712, the French colony had a population of about four hundred and was permanently established. In 1712, under a Royal Charter obtained from King Louis XIV of France, Antoine Crozat was given a fifteen-year charter (or franchise) to settle and develop the Louisiana colony. Crozat, a Parisian merchant and one of France’s richest men, was required to continue the laws of France in Louisiana and provide the colony with two shiploads of supplies and colonists each year. After several years of financial losses in this venture, Crozat petitioned the King in 1717 to revoke his charter. Crozat imported black slaves from the West Indes, but most slaves would later come from Africa. 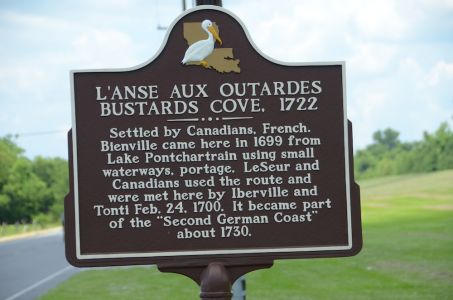 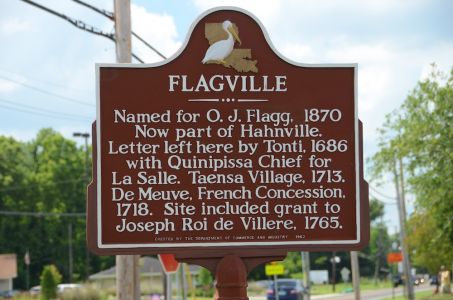 Letter left at this site by Tonti for LaSalle. Located in Hahnville on La. 18 (River Road)Flaggville Historical Marker.