In 1717, Scottish banker John Law, serving as finance minister to the duke of Orleans, was granted Louisiana in a charter almost identical to Crozat’s. The duke of Orleans, regent successor to King Louis XIV, was desperate to help France recover from its financial woes following the king’s reign. He readily accepted John Law’s plan, historically referred to as the “Mississippi Bubble,” to establish the Royal Bank of France using paper currency, with Louisiana and her riches to be used as collateral. Law’s venture depended on the successful establishment of a colony able to pay interest on company shares.

In 1718, Law began recruiting French engagés to settle Louisiana. The early French colonists were not suited or prepared for the harsh conditions found in the colony. Failing in his initial effort, Law was forced to look for non-French colonists. In 1719, Jean-Pierre Purry, a company director with Law, proposed recruiting Germans and German-speaking Swiss farmers for Louisiana.

John Law visited farmers in the Rhineland with advertising pamphlets and broadsides presenting his plan to create a model community. Louisiana was described in posters as “a land filled with gold, silver, copper, and lead mines.” Historians have not yet settled on the actual number of engagés that left their homeland for America, but it is possible that it could be in the thousands. Decades of horrible living conditions contributed to the exodus of people. The Thirty Years’ War had left the Rhineland devastated. This was followed by the disastrous reign of King Louis XIV, which resulted in pestilence, famine, religious persecution, and barbarous French generals. Many died even before leaving European shores. A small group of immigrants arrived in the Louisiana French colony in 1719 and were transported by waterways thirty miles west of New Orleans, to an area which would be referred to as the German Coast. The exact location is still unknown, but it is believed to be in the present-day Taft-Killona area of St. Charles Parish. One old record stated that the le premier ancien village was about a mile and a half from the river. Le Compte France (French records) indicated the first religious ceremony recorded was a baptism on September 20, 1719. In 1720, nine final rites, four baptisms, and one marriage were performed.

Les Deux Fréres, one of the first pest ships to depart for the Louisiana French colony carrying immigrants, left the French port of Lorient in 1720. It was followed by La Garrone, the Durance, and Le St. Andre. Some of these are referred to as “pest ships,” because of the inhumane living conditions. Many passengers died as a consequence of these conditions and others died after arrival on the shores of Old Biloxi (Ocean Springs) before moving inland. Law and his company are credited with financing migration to Louisiana, resulting in settlement of the German Coast. Louisiana historian Edwin Adam Davis believes Louisiana owes John Law a great debt of gratitude. That would indeed be true of the German Coast, as the people of the German Coast were beneficiaries of Law’s settlement plan. Law’s financial plan collapsed about 1720, but the Compagne des Indies operated until 1731, when it returned its charter to France. Law disappeared into exile. France was not to recover for another 10 years.

France’s charter with John Law thus sets the stage for the marriage that would occur one hundred years later, in 1812, between the ecclesiastical parish and the civil parish of St. Charles, where they would become one in name and boundary (Louisiana Constitution of 1812).

John Law’s Charter
There are different schools of thought regarding John Law’s leadership. However, there can be no doubt that his contribution to Louisiana is legendary. Under Law’s leadership and the Company of the Indies charter:

Population of the colony increased;
Several towns were founded and settled, most notably the German Coast;
Agriculture was firmly established, particularly along the German Coast;
The German Coast became the breadbasket of the territory;
New Orleans was established;
The foundations for the establishment of the Catholic religion were laid.

Article 53 of the company’s charter provided for the building of churches and designating priests of the Catholic faith to serve the spiritual ministry of the inhabitants: “…the said Company shall be obliged to build at its expense churches at the places where it forms settlements; as also to maintain there the necessary number of approved ecclesiastics…”

The Company of the West considered this a serious mandate! This clause was responsible for the effort that established the Catholic Church on the German Coast.

In 1721, the Louisiana Territory was divided into nine governmental districts, each under a commandant and judge. A year later, the province of Louisiana was divided into three ecclesiastical jurisdictions by the bishop of Quebec. New Orleans and the surrounding areas were given to the Capuchin Order of Clergy.

“With the help of perhaps 80 lumberjacks, carpenters, and other workers provided by the Company of the Indies, these Germans (Swiss and Alsations) built three villages modeled upon European towns in which houses were stretched out along the only road running through the village… Probaby with the help of the 80 individuals who had assisted in the construction of the villages, the Germans began to clear, cultivate, and sew the lands around them with the grains and vegetables.” – Reinhart Kondert, The Germans of Colonial Louisiana: 1720-1803 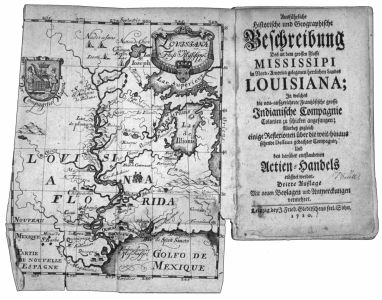 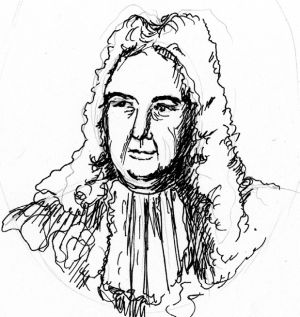 The Rise and Fall of John Law
Vol. XXVIII No. 4, Fall 2011
The Historic New Orleans Collection