“Johann Adam Matern, of Rosenheim, in Upper Alsace. Catholic; 26 years old. Weaver. His wife with a child at the breast; two sister-in-laws, 18 and 20 years of age. One and a half year on the place. Two and a half arpents cleared. ‘A good worker’, who deserves some Negroes. Three pigs. 1731: Three children. Three Negroes; seven cows.”
—  Census of 1724; J. Hanno Deiler, The Settlement of the German Coast of Louisiana and the Creoles of German Descent

There were several settlements along the German Coast that are no longer in existence. A small community was settled in the late 1850s on the east side of Lake Salvador in St. Charles Parish. Early Choctaw Indians and settlers named the village Bois Choctaw which means “Oaks of the Choctaw.” Trapping, hunting, and fishing provided food and livelihoods for all of the families. Some had permanent homes ashore while others lived in chalands (houseboats) to move about for seasonal hunts. Bois Choctaw fell victim to time and tide. 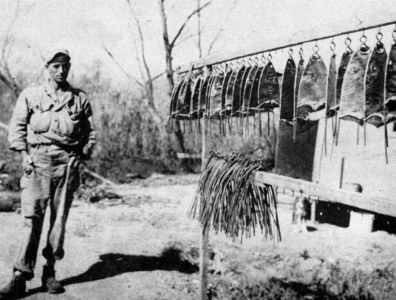 A trapper dries muskrat pelts in the sun. The St. Charles marshland is a fertile area for trapping muskrats and other fur-bearing animals. (Source: St. Charles Parish Resources and Facilities publication, 1947) 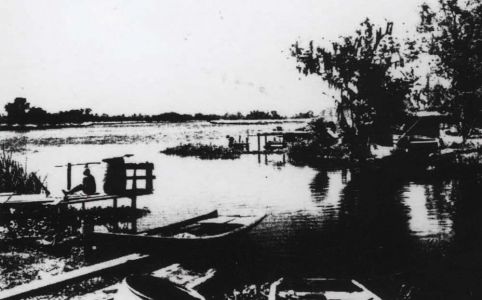 Bayou Gauche serves as a base for commercial fishermen and trappers. (Source: St. Charles Parish Resources and Facilities publication, 1948)

Des Allemands: A Bayou Runs Through It
By Roy Lunk, Published in 2011

Tourist’s View of the Parish