As the centuries changed, so did the landscape of St. Charles Parish. In colonial times, the German Coast was the breadbasket of the colony. The breadbasket continued through the prosperous Spanish era as it did during the plantation era, when the wealthy planters and their landholdings dominated the economy and politics. From the McCutcheons, Destrehans, Rosts, LaBranches, and Trépagniers to the Sellers and St. Amands, the power of land translated to the power to govern. As the 19th Century ended and the 20th Century began, plantations began to fade into the past as large industrial complexes sprang up on the enormous stretches of land along the Mississippi River on the east bank. Easy access to the river, rail, and air service would become a winning combination and would set the stage for the emerging industrial age to grow and prosper.

The lure of steady jobs, paid vacations, and benefits further enhanced the desirability of working in industry as opposed to being out in the field and facing the unpredictable forces of Mother Nature. Workers came willingly and in large numbers to the new commerce of St. Charles Parish. Although the breadbasket would be filled with new “foods,” the people of the German Coast would continue to “feed” the region and America.

Industrial Growth on the East Bank

In the first 30 years of the 20th Century, the culture of the east bank changed slowly but dramatically. The natural deep channel of the river allowed ocean-going vessels to safely dock at wharfs to load and unload products. Replacing the fading plantations were petroleum refineries and the employee communities, which were established to house the workers who otherwise had to be transported in daily by rail. In 1914, Destrehan Plantation was sold to the Mexican Petroleum Company, which began operating in 1918. An entire village was developed to support the needs of the workers including a hospital, schools, and a company store. Many of the five hundred employees lived at the refinery in neat, well-built “modern” homes or bungalows. They enjoyed many recreational amenities. Some African American employees were housed in the former slave quarters. The old plantation house was eventually used for offices of the new refinery. In time, the refinery became Pan-American, then Amoco. Beginning in 1950, the houses moved into various subdivisions in the community. Amoco closed in 1958, but today most of the plantation property is owned by British Petroleum.

Upriver in the town of Sellers, the New Orleans Refinery Company was established in 1916 on 366 acres of Good Hope Plantation. The town of Sellers eventually lost its identity to the new industry. The postmistress of the Sellers post office and the manager of the refinery met to clear up a confusing mailing situation. Mail for the refinery was going to both Sellers and Good Hope, so they coined the name NORCO, the first letters of the company’s name, and that became the place to which refinery correspondence was sent.

New Orleans Refining Company, which gave the town of Norco its identity, was purchased in 1929 by Shell Petroleum Company, a forerunner of Shell Oil Company. It assumed the name Shell Norco Refinery. Its presence in the community expanded as did the employee village, which had been created by New Orleans Refining Company. Some employees and their families lived in the Shell village while others had access to the plant site amenities. These eventually included such things as a movie house, golf course, baseball fields, bowling alley, gymnasium, swimming pools, and tennis courts. Social activities and sporting events were a source of entertainment for the broader community.

Several other industries sprang up in the same area. Island Refinery opened on Prospect Plantation in New Sarpy in 1918. In 1925 in Good Hope, the General American Transportation Corporation, which included a tank car repair shop, and the General American Tank Storage Terminal opened. The terminal soon became the site of the world’s largest petroleum tank storage terminal. An unusual industry, the American Molasses Company (one of the largest in the world) was also located in Good Hope. Wesco Water Paints, Inc./National Gypsum occupied a site on Wesco Road at the border of Good Hope and Norco. These industries led to the development of the “Wonder Town” of Good Hope as it was called in a full-page story in the Times Picayune in March 1931. Good Hope had a school, restaurant, bank, hotel, drugstore, a post office, and its own newspaper. Two other industrial sites opened on the east bank in St. Rose on Cedar Grove Plantation: Carson Petroleum Company in 1919 and Cities Service Oil Company in 1922.

Many east bank business sites remained in place for decades, some with new names. Others disappeared over time just as the plantations they had replaced faded from the horizon.

Destrehan Refinery is the Site of Old Jefferson Highway Dedication

Old Jefferson Highway, dedicated in 1919 as one of the first cross-country automobile highways traversing the continent from New Orleans to Winnipeg, Canada, came through St. Charles Parish in the era before U.S. highways. The original stretch through the parish was the road that is now River Road, or La. 48, and it started in New Orleans continuing into the Jefferson, St. Charles, and St. John the Baptist parishes and beyond. Nicknamed the “Palm to Pine Highway,” it was built with help from associations of early motoring groups. That original route soon blended into other routes. But it apparently was front-page news in New Orleans on Friday, February 5, 1926, when the mayor of Winnipeg, Canada, arrived in Destrehan to welcome acting New Orleans Mayor Arthur J. O’Keefe at the dedication of the highway. Many locals were on hand for the party held near the tennis courts at the Mexican Petroleum plant site. 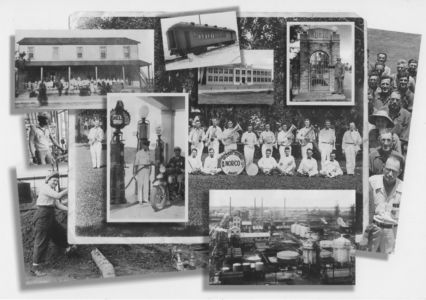 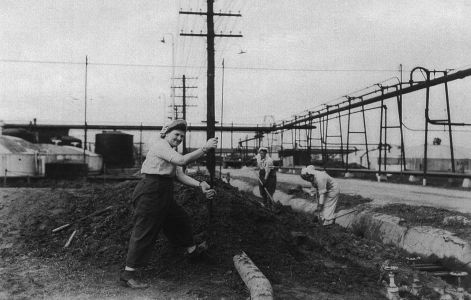 St. Charles Parish as it Used to Be
By Numa Zeringue
St. Charles Herald
February 16, 1978

Irene Hebert – A Century on Apple Street from SCPhistory.org on Vimeo.

Exhibits at the Shell River Road Museum from SCPHistory.com on Vimeo.