As the 1950s rolled around, other economic engines were starting up. The Delta Match Corporation opened in St. Rose in 1952 on the old Frellson Plantation, and Lion Oil Company (Monsanto) construction began in 1952 in Luling on the old Ellington Plantation. Delta opened as the first large, wooden match manufacturing plant in the South, eventually becoming the largest of its kind in the world. In 1955, Shell Chemical opened a plant in Norco on the site of the old Diamond Plantation.

In 1958, the parish would experience a loss of commerce with the closing of one of its first major industries, the American Oil Company in Destrehan. Hundreds of workers were left jobless. Whitecollar workers were given options to move to other company locations. Intervention by parish officials resulted in cooperative efforts with the company to help the unemployed workers find jobs.

The first unit of the Little Gypsy Power Plant in Montz was activated by the Louisiana Power and Light Company in 1960. And, as in the past, new opportunities were just around the corner. A new type of industry was being actively pursued by parish officials. Two grain elevators started up in Modoc: Bunge Grain Elevator in 1961 and the St. Charles Grain Elevator in 1968. On the west bank, the Farmers’ Export Grain Elevator opened in 1963 in Ama.

Lion Oil Company opened its new operation in Luling in 1954, bringing many of its employees from its El Dorado Arkansas facility. The new plant was called the Barton Plant after Colonel Thomas Barton, chairman of the board of Lion Oil. Early production included ammonia and chlorine where pay for general employees was about $.90 an hour. Lion Oil was short-lived in St. Charles Parish as Monsanto Corporation acquired the plant the following year.

Employees found life in south Louisiana was different than it was in Arkansas. Most had to use temporary living quarters but eventually built homes on Barton Avenue and Celia Drive where they could look out at cows grazing in pastures behind them. The influx of so many new families soon led to the rapid growth of Mimosa Park subdivision off Highway 90. Elementary students living there still attended Luling School until Mimosa Park Elementary School opened in 1961.

Newcomers found a few conveniences in the Paul Mallard-River Road area such as: Roux’s Grocery , Donnaud’s Grocery, Luling Trading (a precursor of WalMart with a little of everything, including a few groceries), Dr. Hirsch’s tiny hospital, Mr. Claudet’s and Mr. Horn’s barber shops, and two restaurants Busalacchi’s and Bennie Roziano’s.

On the grounds of Monsanto was a recreation area built for the employees and their families. Activities included ping-pong, pool, and dancing. Square dancing was so popular that callers and instructors were provided. Employees developed a fastpitch softball team and played against other local companies. Several bowling alleys were added using pin boys to set up the pins. Teenagers loved to spend time at the recreation facility, especially after Mr. Johnny Dufrene became the Director. Another popular spot was the cafeteria which was available for employees and their families. Each year the secretarial pool looked forward to a weekend on the Gulf Coast, usually staying at the Broadwater Beach Hotel and sponsored by Monsanto.

Monsanto made history at its facility in Luling in 1962 when it became the first practitioner of an automated Distributed Control System (DCS). The direct electronic automation of an ammonia production facility at Luling greatly increased overall efficiency and safety of chemical process control. This Luling DCS was reportedly on display at the Smithsonian. Automated DCS led to a rapid advance of technology throughout the chemical industry.

Union Carbide’s arrival in 1965 brought in a large influx of new families from many parts of the country. Within a few months, they were greeted by Hurricane Betsy, one of the worst hurricanes to hit the parish. Located in Taft, Carbide soon opened the Olefins One Complex and Complex #2, acrylics. It was one of the first chemical plants to use computerized control rooms throughout the plant and to hire an integrated staff.

Dow completed its merger with Union Carbide in 2001. 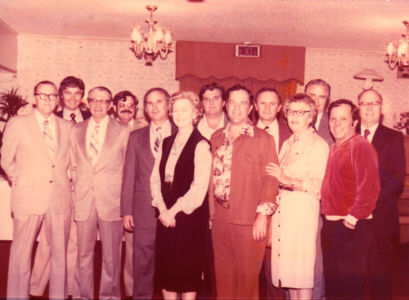 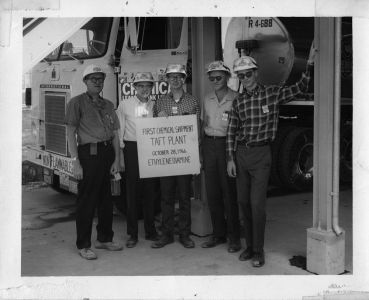 Union Carbide and the Growth of St. Charles Parish's West Bank – Dave and Wanda McClung from SCPHistory.org on Vimeo.

Excerpt from A History of Union Carbide Corporation from the 1890s to 1990s by Robert D. Stief 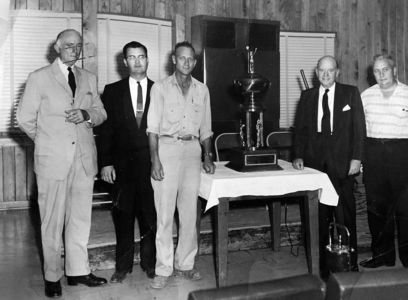 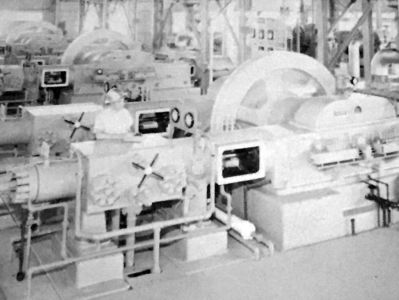 Louise Broach on Moving to St. Charles Parish in the 1950s from SCPHistory.org on Vimeo.