The LeMoyne brothers, Iberville and Bienville, were timeless advocates of schools to educate the colonial children.

“He [Bienville] proposed the establishment of a school in New Orleans where the boys could be taught geometry, geography, and other subjects. He wrote, ‘young men brought up in luxury and idleness are of little use.'” (E. Davis, Louisiana: The Pelican State) During the colonial period and before the establishment of public education, schooling was predominantly carried out in church buildings. Some students were sent abroad to be educated, some had private tutors, and others went to private schools in New Orleans. Classes were also held in other buildings and residences.

The area being primarily agricultural, many children were needed to help their parents plant, maintain, and harvest crops and were unable to attend school. After the Territory of Orleans was established, the first higher education system put in place was the College of Orleans created by a legislative act in 1805. According to Josepha Breaux, the college was a pattern for other schools and the first institution of higher education under state control in this country (Louisiana Historical Quarterly, Vol VII, 1913–1914).

Its regents were given authority to establish academies in each county, with appropriations from the state treasury. In 1819, a law was passed which superseded all previous legislation regarding public schools and required administrators of county schools to answer to the police juries of the parishes in which they were located. This was done to coordinate schools into one parish system.

To coordinate public education throughout the state, the secretary of state was made superintendent in 1833. All school administrators were then required to report to him. The period of public education began with the Constitution of 1845, which created the office of state superintendent. Alexander Dimitry, who has been called the “Father of Louisiana Elementary Education,” held this office from 1847 to 1851, during which he organized and put into operation a statewide public school system. The office of superintendent of public schools was abolished in 1852 and the president of the police jury was given the authority to fill vacancies in any school’s board of directors. The first superintendent of the German Coast was J. M. Dieudonne who began his term in 1852.

The Constitution of 1868 decreed that there be at least one free public school in each parish for children from ages six to twenty-one “without distinction of race, color, or previous condition.” Schoolhouses in rural areas were very rustic and were built of logs. Holes were left to serve as windows. The students walked on earthen floors and “desks” and seats were constructed of split logs with wooden peg legs. One half of the proceeds from poll tax collections were used to support the schools. However, each school was expected to raise its own funds for textbooks. A state board of education was established to oversee all public schools and the state was divided into six school districts. Boards of school directors for each parish were appointed in 1871 with terms of two years, superceding ward boards and boards of cities and towns having a population of less than one thousand. The scope of authority and duties of parish boards relative to improvement and extension of schools was defined. The town and city boards, which were determined unnecessary, were abolished. During Reconstruction, many blacks served on school boards. The first St. Charles Parish School Board included blacks and whites.

In 1877, a parish school board, appointed for a four-year term, was constituted a body corporate with the power to make contracts, including written contracts with teachers.

The 1879 Constitution provided parish school boards the power to appoint parish superintendents, who were to be ex-officio secretaries of the boards. All proceeds of poll tax collections were dedicated to support parish schools in which collected, but none of the raised funds could be used to support any private or sectarian school.

In 1879, the St. Charles Parish Public School System was established and placed under the jurisdiction of the police jury. At the first recorded school board meeting were President Emile Rost, P. M. Kenner, Leon Sarpy, W. C. Certerian, H. L. Youngs, George Essex, Pierre Darensbourg, and Theodule Telesphore Baudouin, who served as the board secretary and superintendent. A. Robens served as parish treasurer. In the beginning, ten schools were located throughout the parish and were identified by number. The “schools” were churches, private homes, and other buildings. Enrollment in 1882 was recorded as 393 black students out of a potential of 1,595 and 113 white children out of a parish population of 356. It is assumed that other children were educated in their homes by tutors or parents. There were ten teachers and each received four hundred dollars per year. White schools were at Gassenville (Luling) and Hahnville. Schools for black children were at Boutte Station, Bethlehem Baptist Church in Hahnville, and other black churches and benevolent societies throughout the parish. The initial school program went only to fourth grade. Children living over two miles from schools were provided transportation. In 1884, nine out of ten existing schools opened. Two schools had to close that year due to the Davis Crevasse. In 1888, the General School Act decreed that having police juries assess no less than one and one-half mil on owned land in respective parishes would fund public schools. In 1891 there were seventeen public and four private schools on the German Coast. In 1896 seventeen schools were in existence with ten attended by white students and seven by blacks. Using private buildings was still popular, and only six school buildings were owned by the parish. In 1895, T. B. Sellers, son of Colonel Sellers, was made superintendent.

The 1898 Constitution and all those following provided free but separate public schools for white and colored children. In 1898, parish school boards were again created to elect parish superintendents. After 1898, the tax assessor made an enumeration of educable children every four years. 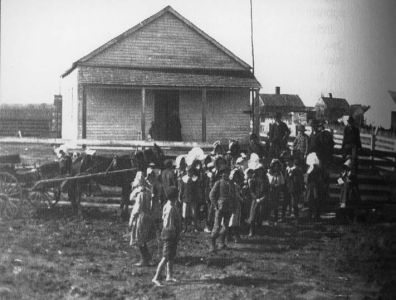 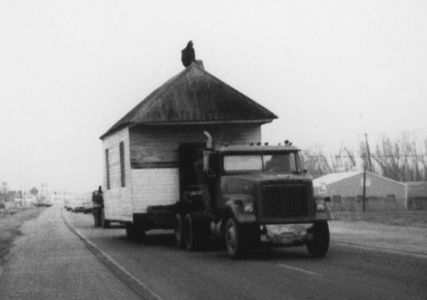 In 1996, the Bethlehem Benevolent Society Hall is shown on its journey to the West Bank Bridge Park on River Road in Luling to be used as the St. Charles Parish Tourist Information Center. The hall is located on the property at Destrehan Plantation. (Photo courtesy of St. Charles Department of Economic Development and Tourism)