While St. Charles Parish was growing and developing, individuals frequently described the area from an “outside” point of view. J. W. Door, a gentleman connected with the editorial department of the New Orleans Crescent, was one of those detailing parish activities and geography in the mid-nineteenth century. He made a horse-and-buggy tour of a considerable portion of the state of Louisiana during the spring and summer of 1860, publishing letters in the Crescent between April 30 and September 10, 1860. Each letter was signed “Tourist.” – The Louisiana Historical Quarterly, Volume 21, No. 4, October 1938.

From Daily Crescent, April 30, 1860. These letters depicted a beautiful, peaceful picturesque setting of the German Coast at that time prior to the Civil War. However, that would all soon change.

Dear Crescent-
I thus begin serving up to you the first slice of Louisiana, intending to keep on doing so, if horse-flesh and your correspondent hold out, until I have cooked up in style, which I hope will suit the taste of your readers, the whole of the State. Since Wednesday morning, when I left the city and the Crescent office behind me, crossed the river at the Stock Landing and started with all the State before me, I have been buggying along the levee “up the coast”, amid the charming and peculiar scenery of that region.

There are many in New Orleans who have lived there many more years than your correspondent, who have a very poor idea as to what the “coast” is. They fancy they have seen it from the deck of steamers plying on the river, but they are mistaken. They have only had glimpses of the country and dissolving views of the tops of the houses behind the high levee as they dashed past. To see and appreciate this Acadian land they should be behind a good horse and rattle along the levee road, which is now as smooth as the new Canal shell road. A constant succession of wealthy estates keep the interest alive, for there are few of them that will not repay pausing to admire. Splendid old homesteads dot the road at the distance of a quarter of a mile apart, the out-buildings, negro quarters, etc., forming at each a considerable village, so that the road up the coast is almost like a street of vast, thinly built city. The plantations having a narrow front on the river and running for a back, the houses are thus brought close together, and render the levee road a suburban avenue unequaled in the world, bordered on one side, as it is, by the unequaled river of the world, the clustering steamers and other crafts on which give an animated variety to the changeful scenery.

It is no sort of use for me to attempt to describe any of the splendid residences of the princely planters, for during yesterday’s journey I passed dozens, each worthy more than a passing notice. All that tasteful architecture, ornamental shrubbery and magnificent moss-hung trees can do towards the beautifying of the sugar planters residences in Jefferson and St. Charles parishes, as far back as I have been, is effected. The farther I go from the city the more costly, elaborate and extensive the planters’ houses seen to be. Seven or eight miles above the city the estates begin to show the most striking evidences of wealthy and refined occupancy, though there are a few fine places in the lower part of Jefferson parish.

Since I have been traveling up this “coast” it has occurred to me that people who take the trouble to travel thousands or hundreds of miles from New Orleans to find some pleasant and healthful locality to sojourn or settle, are taking a giant deal of unnecessary and unremunerative trouble for they can certainly find nowhere else a more delightful country than they have right at their doors. Along the pathway of the wide river a constant current of cool air pours above in the warmest season. A continual draft is created by the cool air of the river rushing across the banks to supply the heated interior.”

St. Charles Parish
I write to you, vide date, from St. Charles Court House, where is located one of the three post-offices which the parish boasts. This “village” contains the court-house building and jail, which are of recent construction, and well and quite handsomely built of brick, and some five or six houses, one of which is occupied as a store. The settlement is twenty-nine miles from New Orleans. The other post offices are McCutcheon’s Landing, on the left bank, opposite this place, and Taylor’s on the right bank, thirty-six miles from New Orleans.

The value of real estate held by residents of the parish of St. Charles is $1,646,900, and of non-residents $56,366. These figures are legally correct, and are one year later returns than have been published by the Auditor of the State. The value of slaves $2,053,300; of cattle $25,200; of carriages and vehicles $8450; of capital invested in trade $15,000. this last item is very small, for New Orleans is too near to give country dealers much chance. The few stores in the parish are nearly all scattered along the levee four or five miles apart, and are small affairs. The largest and best stocked concern that I have yet seen is that of J.B. Gassen, at Gassen’s Landing and Ferry, twenty-six miles above the city. The other stores in the parish are Levet’s, Bistoul’s, Vial’s and Labat’s, all on the right bank of the river, and Boutte’s back on the Opelouses Railroad. Thus, you perceive, “merchandising” is a very inferior interest in these parts.

The area of the Parish of St. Charles is 81,413 acres, of which 45,884 acres is under cultivation, and 35,529 uncultivated. About 18,000 acres are in cane; about 6000 in corn, and three or four hundred in rice. These are very nearly accurate, their deviation from actual fact being so trifling as to be of no general consequence. The total population of the parish is about 5000, of whom about 900 are whites, 3719 slaves and about 200 free colored. Th Parish pays about $12,000 taxes, of which the mill tax, for the support of public schools, amounts to about $3,800. There are three public school districts in the Parish, and one school in each, and the number of educable children is about three hundred.

The Parish officers of St. Charles are—Samuel McCutcheon, President of the Police Jury, whose post-office is at McCutcheons’ Landing, and Messrs. Noel St. Martin, Sheriff; C. St. Martin, Clerk District Court, and Parish Treasurer also, and Emile Tastet, Recorder, whose post-office address is St. Charles Court-House. Among the “solid men” of the parish, are the following, some of whom are very “solid” in the matters of money, lands and negroes: Messrs. George Wailes, Sosthene Deneufbourg, Webb & Broaddus, Francis Webb, W. B. Whitehead, Charles Davenport, Chauvin, Levois & Co., Francis Bougere, Troxler Brothers, George E. Payne, Richard Taylor, Louis Ranson, A. Lanfear, Meyronne Brothers, Gautier & Ory, P. Sauvé, Ezra Davis, Nosin Zeringue, Montegut & Lagrove, P. A. Rost, George Pincard, E. F. Labranche & Co., J. W. & S. McCutcheon, Pierre Soniat, Octave LaBranche, Lestang Sarpy, A. Duplantier, George R. Price and Henry Frellson. There are quite a number of rich widows in the parish, I am told, so rich that they deserve to be ranked among the “solid men”, but I will not give their names, lest they and the other good people of the parish should be afflicted with an invasion of fortune-hunting bachelors.”

The Crops, Levees, Etc.
The planters are complaining very much of the backwardness of the rattoon cane in coming up, and the scattering and imperfect manner in which it does come. The plant cane, however, is very promising, and the general prospect of the crop, at this early date, is accounted good. Corn is looking very finely.

The levee all along, so far, is in splendid condition. The fracture mad by the Labranche Crevasse is most thoroughly healed, and like the whole of the levee from the city up to this point, will defy all that any flood can do against it.

My next letter will be from the parish of St. John the Baptist 14 miles from here. 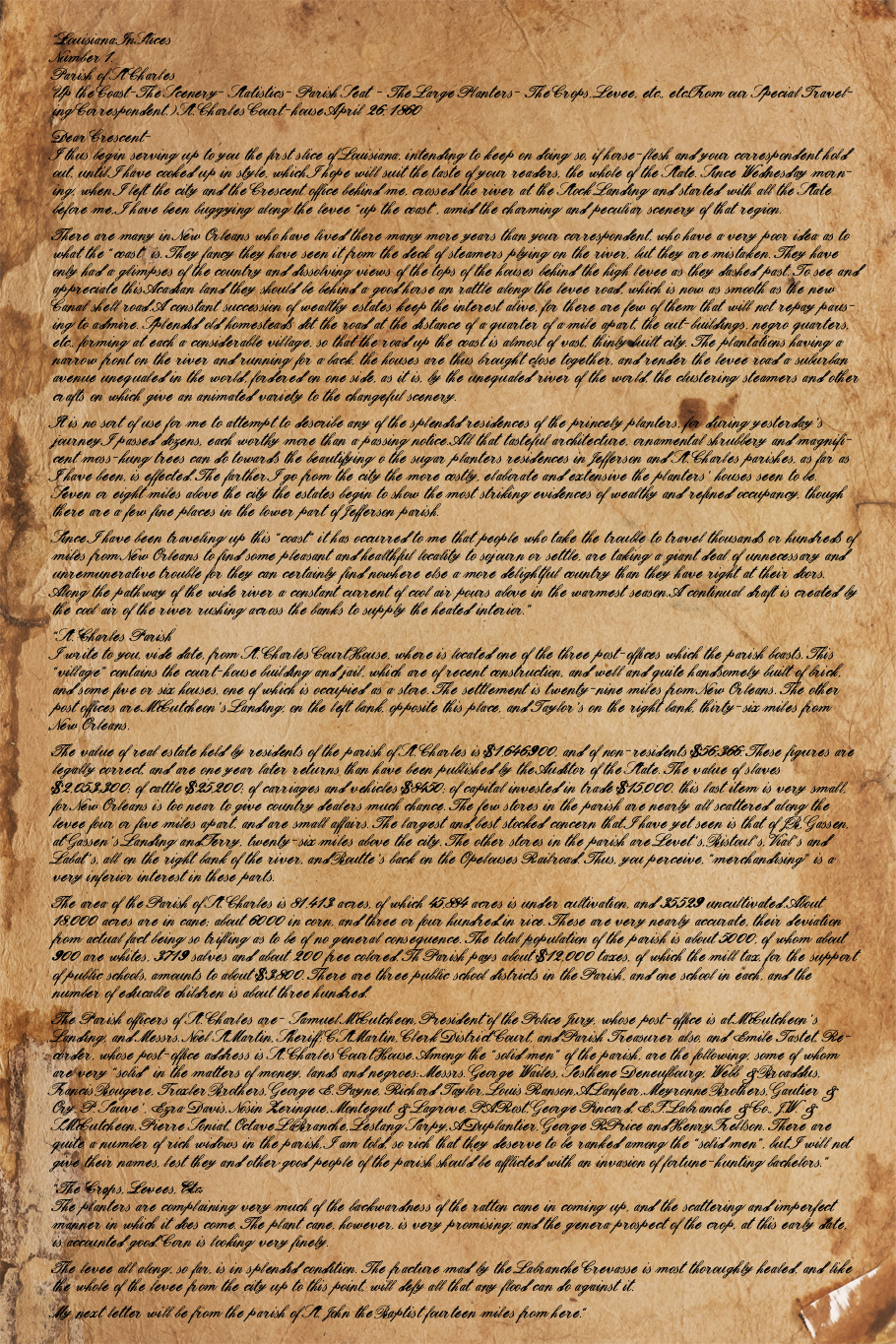