The Denver was rapidly deteriorating as the 1900s ended. Berthed in Bayou Gauche, it endured many years of harsh elements and sank several times. After each sinking, Michael Matherne and his father, Victor, then in his eighties, valiantly tried to shore the Denver to keep it afloat. Their efforts being unsuccessful, Michael enlisted the help of the St. Charles Historical Foundation, which in turn solicited the help of the Parish President and Council. In 2001, the Denver was secured and floated from Bayou Gauche to a restoration yard in Larose. Hull restoration then began, and in June of 2002, the Denver was brought to its current location at the Ormond Plantation in Destrehan. Restoration work is scheduled to continue in the near future.

“I have heard recently, for example, of the boat builder who built these boats sometimes being ported in a woven basket to the cemetery aboard the boat they built – In other words, they were brought to their burial place on the same boat they built. This is one thing that was typical at one time apparently in this region. There you have a deep and profound local meaning that has to do with families and people who live in this area…”

Dr. Brassieur was of great assistance during the Foundation’s efforts to have the Denver adopted by speaking before the Parish Council and attending meetings to provide further information. The Foundation is grateful for his generous and invaluable contribution. The following excerpts are taken from Dr. Brassieur’s history of the Denver, kindly provided to the St. Charles Historical Foundation:

“Lugger-type boats were first used and built in Louisiana during earliest colonial times. European vessels from France and elsewhere carried a variety of ship’s boats and longboats which proved effective for travel and exploration in Louisiana’s shallow coastal and inland waters. Characteristic features of these ship’s boats included plumb bows, shallow draft rounded (modeled) hulls, and hourlgass transoms. They were also typically rigged with a four-cornered lugsail, from whence the Louisiana Lugger derives its name. The ancient French term for these relatively small open boats is ‘canot’ (the final “t” is pronounced). Louisiana Cajuns still used the French term ‘canot’ to refer to the luggers.”

During the three centuries of their use in Louisiana waters, lugger type boats evolved at a deliberate and fairly conservative pace. The most conservative feature of the lugger is its hull morphology. Whether built in 1750, 1850, or 1950, luggers sported plumb bows and shallow-draft rounded (modeled) hulls. Artists’ illustrations of early 19th Century luggers depict hulls with sharp bows flaring quickly into fat, rounded cheeks (les joues) in the forward section. The greatest beam is at midships tapering aft to form a fish-shaped overhead profile. These basic hull characteristics remained unchanged in Louisiana from the earliest Colonial Period throughout the first half of the 20th Century. On the other hand, luggers evolved and transformed over the years in response to changing demands and technological innovation. Although the lugger was always primarily built by Acadian (Cajun) boat builders, it was used by Croatians / Dalmatians, Italians, Canary Islanders, Filipinos, and Anglo- and African-American boatmen, as well as Cajuns.

Lugger-type boats once dominated Louisiana coastal waters in terms of their numbers and commercial significance. A great many were built and operated in St. Charles Parish where they became essential to the livelihoods of generations of local families. However, these boats are now rare and opportunities to preserve them are becoming increasingly scarce. There are only a handful of lugger hulls of any sort left today in Louisiana, and it was a very prominent boat type. The skill and notoriety of the builders is another way to judge the value of something and the Dufrene builders were at the top of their trade. The boats have national significance. The Denver, the lugger that was used in the oil field for towboats, is special for a number of reasons. Again, it was built by the same Dufrene family and interesting because it was probably one of the last luggers built. For that reason, it ends the cycle of luggers. I think it is very valuable.

The Denver: The 48-footlugger tug Denver built at Bayou Gauche in 1953 by Joseph “Yep” Dufrene for Victor Matherne. The Denver was built as an oil field tug and auxiliary boat hired initially in support of Amoco, later Exxon, drilling operations. The Denver was used to push work barges and perform miscellaneous standby oil field tasks in bayou, lake and marsh oil fields. The general form of this lugger is clearly derivative from earlier rounded-fantail motorized luggers used in Louisiana.” 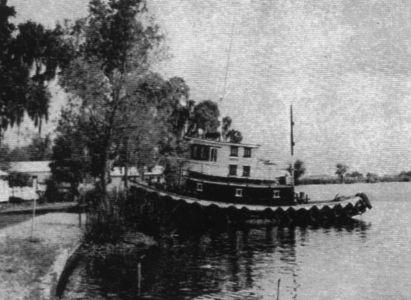 “The Denver” Boats have always been a vital part of commerce on the bayous, canals, and rivers of the parish. (Source: St. Charles Parish Resources and Facilities publication, 1947) 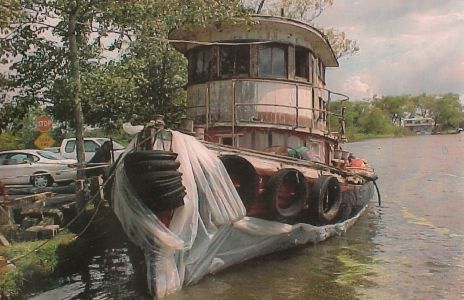 Full Deck: Old hand-hewn luggers awaiting restoration are treasures of the past
By Kathleen L. Pons
The Times-Picayune
July 13, 2003

On Course to be Shipshape
The Times-Picayune
September 13, 2000

Residents hunt down clues to parish‘s past
By Anita Hymel
The Times-Picayune
April 6, 2003