Located in St. Charles Parish, but accessed through the Westwego Canal.

From “Westwego from Cheniere to Canal” by William D. Reeves with Daniel Alario Sr.

As the gateway to the Barataria estuary, the marsh recla­mation movement dramatically influenced Westwego’s first decades. The fortunes made in agri-business by 1900 inspired midwestern, usually Chicago, millionaires to search for new frontiers of virgin soil. Looking at a map of Louisiana in Chicago, they saw vast acreages still in government hands, and they heard about the new levee boards anxious to exchange marsh for funds to build levees. Edward Wisner was one such visionary whose motivation was also to escape from the cold winters of the north to improve his health. He came to Louisiana about 1900 from Michigan, entranced by the prospect of draining marsh and converting it to farm­land. The railroads, such as the Illinois Central and the Southern Pacific, developed pamphlets to sell the lands along their routes that touted the land’s fertility and accessibility. At the same time, the new Office of Experiment Stations in the Department of Agriculture commenced promoting agri­culture in marshes.

Closer to Westwego, young Chicago attorney Cornelius Jon Ton purchased a section of land ‘Just northwest of Lake Cataouatche. In 1910, he became interested in the reclama­tion of Louisiana marsh and organized the New Orleans Netherlands Company,· of which he was president. Dutch investors provided the financing and Jacob Vanderbilt, the farm managment. By 1915, the company had raised $500,000 and built 9 miles of levees and numerous struc­tures, including a pump house on the western shore of Lake Cataouatche with a capacity of 109 million gallons per day. Ton specialized in early vegetables, marketing them as a “win­ter garden.” The Netherlands Company also operated a dairy farm and its own water transportation system to New Orleans. It surveyed the town of Winter Gardens with 398 lots and sold over 112 of them.

Westwego people familiar with the marshes of the Barataria estuary made excellent workmen in the new recla­mation projects. Edward Abadie worked for Cornelius Jon Ton as a farm hand on the Netherlands project. The family lived on the Grand Coquille Shell Ridge on the northeast side of Lake Salvador, approximately 600 feet east of Bayou Segnette. At one time, this ridge stretched as far south as Lafitte. 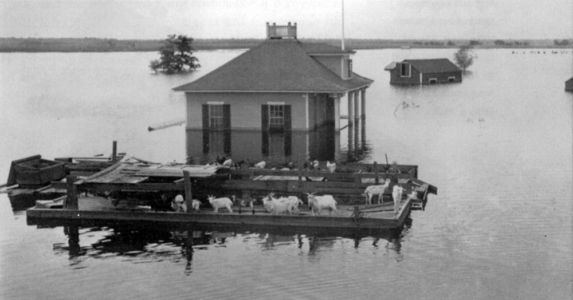 View of Winter Gardens after the flood of 1915. From "Westwego from Cheniere to Canal" by William D. Reeves with Daniel Alario Sr.

The Yankee Doodle on west side of Lake Cataouatche. From "Westwego from Cheniere to Canal" by William D. Reeves with Daniel Alario Sr.

Luling Development Ad
The Times-Picayune
May 15, 1927